All survey respondents in Austria (100%) reported domestic payment delays. This is the highest percentage in the region, significantly higher than in 2017.

Based on the survey results, 2018 brought many changes in Austria – more frequent payment delays, an increase in the proportion of overdue B2B invoices, a longer invoice to cash turnaround and a higher proportion of uncollectables. A notable percentage of respondents reported that their businesses have been impacted by late payment. To manage the impact, they had to pursue additional financing, correct cash flow, or postpone their own payments to suppliers. 18.9% of respondents reported that past due B2B invoices led to revenue loss. 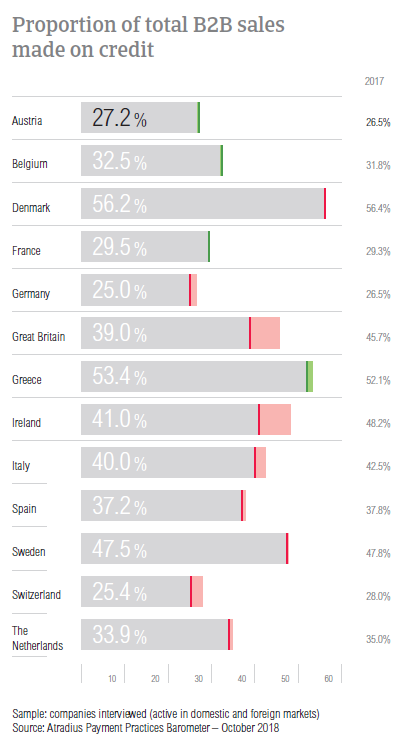 We trade on credit with regular customers, with whom we have built long-term partnerships and whom we trust. New customers are granted trade credit only if we believe that the business relationship will last longer.

Companies in Austria grant trade credit to their foreign B2B customers for the same reasons: regular customers whom they trust and because credit sales are common practice in the sectors they operate in. The top reasons for refusing to grant trade credit to foreign B2B customers are: a lack of information on the customer’s business and payment performance (mentioned by 32.5% of respondents) and high economic and political risk in the customer’s country (mentioned by 35.0%).

We trade on credit with foreign B2B customers because it is a common trend in the market.

The second consecutive year with an increase in past due receivables

The vast majority of respondents in Austria (95.0%) reported frequent late payments by their domestic and foreign B2B customers. This was the highest percentage in Western Europe and a higher percentage than in 2017, when it stood at 91.5%. Moreover, all survey respondents (100%) reported domestic payment delays. 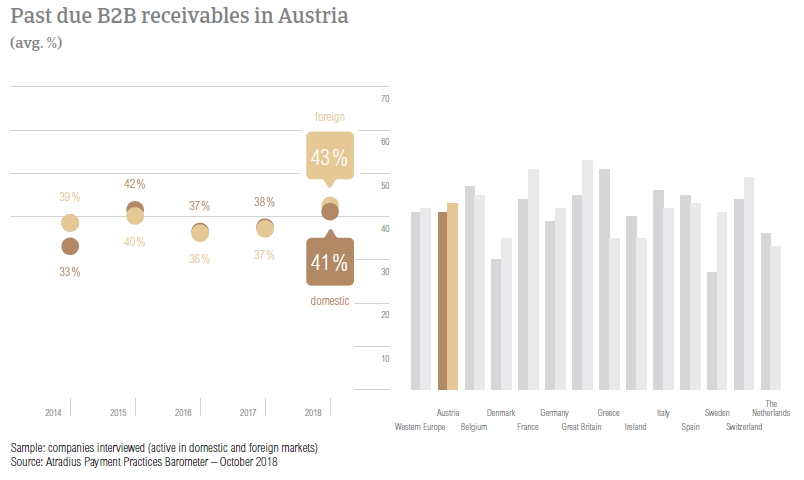 The Days Sales Outstanding (DSO) figure in Austria is 32 days on average and 2018 marks the third consecutive year of decrease (2017:34 days). 67.3% of respondents said that they do not expect changes in their company’s DSO over the next 12 months. 18.8% foresee an increase and 13.9% a decrease.

Additional financing needed to manage the impact of payment delays

Domestic B2B customers of respondents in Austria are given, on average, 23 days to settle their invoices. This is two days shorter than in 2017. In contrast, foreign B2B customers are given, on average, 27 days to fulfil their payment obligations – two days longer than in 2017. The average payment terms recorded in Austria are in line with the averages recorded in Western Europe overall. 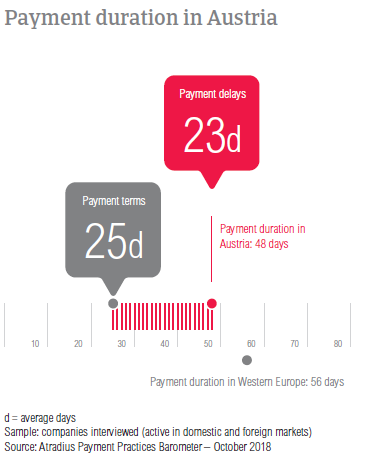 Among the Western European countries surveyed, Austria had one of the lowest percentages of respondents (38.3%), who reported that payment delays did not affect their businesses significantly. To manage the impact of overdue invoices, 22.8% of respondents in Austria mentioned the need to pursue additional financing and 20.0% said that they needed to take specific measures to correct cash flow and postpone their own payments to suppliers.

The majority of Austrian respondents are invoicing online

Asked about the effect of electronic invoices on payment duration, the majority of respondents (54.8%) said that they received payments faster. In contrast, only 4.1% stated they have experienced slower payments and 41.1% of respondents believe that e-invoicing has no noteworthy effect.

Austrian respondents fear deterioration in global growth due to US protectionism

Like their peers in Western Europe, respondents in Austria perceive US protectionism turning into a trade war as the most significant potential risk to global development (more significant than misguided Fed policy, China’s ‘hard landing’ and geopolitical risk). The 40.4% of respondents in Austria citing this as the main threat to global growth is slightly lower than the regional average of 44.8%. Additionally, 27.5% rated US protectionism as a significant risk – although they don’t believe it will hamper global growth the most.

22.0% of Austrian businesses considered Fed policy to be the second most significant risk to global growth. 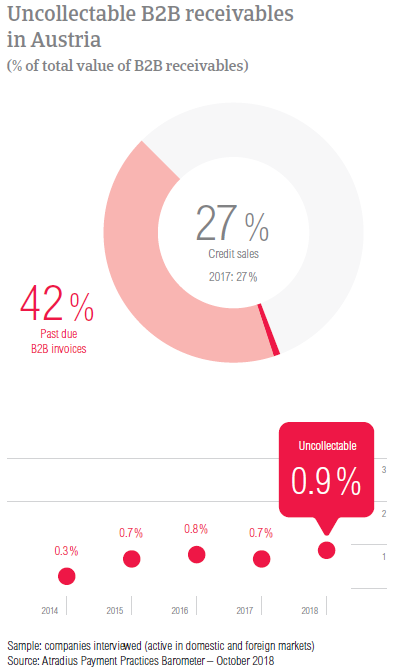 In Austria, uncollectable receivables originated most often from B2B customers in construction, consumer durables, services and business services. Top reasons for writing off B2B receivables as uncollectable were the customer going bankrupt or out of business (mentioned by 64.8% of respondents), the inability to locate the customer (mentioned by 27.6%) and failure of collection attempts (26.9%).

Austrian suppliers reported that B2B customers in the construction and consumer durables sectors generated some of the longest payment delays, on average 24 and 23 days late respectively. 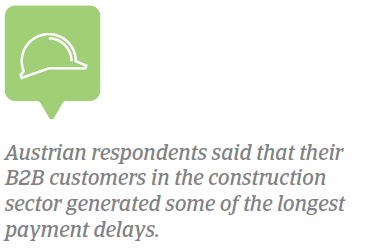 In 2018, economic growth is expected to remain above 2%, sustained by domestic and international demand. The momentum is forecast to slow down in 2019.

The global economy is in an upswing based on broad-based economic growth and still-low interest rates, but we are reaching a turning point.

Having drawn from the expertise of Atradius Collections' local offices, the International Debt Collections Handbook explains the different regulations and procedures for debt collections in Austria.